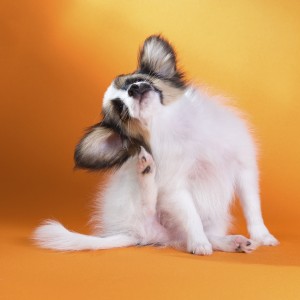 While most dogs and cats have had an occasional flea jump on for a quick bite to eat and then jump off. But, when the flea jumps off onto the living room rug, things get nasty. People who’ve had a flea infestation in their home say it’s one of the worst things they’ve ever experienced. It’s not even about fleas biting your pet or even you. It’s a numbers game…

One pregnant flea can lay 50 eggs a day which hatches into almost invisible larvae in a few days. Five to 15 days later the larvae spin cocoons and pupate. Pupae can exist for anywhere from 3 days to over a year. Adult fleas emerge when temperatures and humidity are optimum, or when a passing animal or human wafts an enticing whiff of carbon dioxide their way. They then jump on the hapless dog, cat, or tennis shoe, start sucking blood, and the fun begins all over again.

Fleas are notoriously hard to pin down. Not only can they jump 200 times their own length, but they also love hiding in dark crevices. They invade furniture and carpeting, get into vents and between floorboards, snuggle into bedding, and no matter where they hide, are almost impossible to kill. De-fleeing your home will involve repeated vacuuming, scrubbing, spraying, fumigating and crying. In the words of one flea-invasion sufferer, “Just shoot me now.”

Ticks, while not as aggressive in a house, are even more horrifying to discover on yourself or your companion animals. Anyone who has peeled off a shirt or inspected a pet’s ears to expose a gaggle of entrenched ticks knows the special revulsion of that moment.

Unfortunately, as if the infestation and de-ticking aren’t bad enough, fleas and ticks carry diseases, including ehrlichiosis, Lyme disease, Rocky Mountain spotted tick fever, anemia, tapeworms, tularemia, and infamously, the Black Plague. Plus, flea bites itch. Really itch. Ticks, if improperly removed, leave their heads behind which can cause inflammation at best and serious infection at worst. In a word: Yuck.

Which is all the more reason to get a handle on fleas and ticks before they take over your or your pet’s life. But how?

Unfortunately, there isn’t one answer or approach to either prevention or treatment. There are plenty of anti-flea and -tick products on the market, but most are ineffective and some are just plain dangerous.

The often-ineffective include flea and tick collars – mainly because fleas and ticks have become resistant to the active ingredient. Topical anti-parasitic liquids applied between the shoulder blades of your pets can work well if they are the right medication for the right animal and the right strength for that animal. Again, over-the-counter versions may only kill adult fleas, leaving you and your dogfighting 90% of the problem. Others don’t repel new hitch-hikers so your pet can be attacked again immediately. The bottom line? Many over-the-counter preparations may actually make the situation worse.

Sadly most “natural” preventatives like garlic, brewer’s yeast, and other non-toxic remedies just don’t work, because if something isn’t toxic, it won’t kill them. Diatomaceous earth, made from the silica-rich shells of microscopic sea creatures, is effective against flea larvae in carpeting because the shells’ sharp edges cut the wriggling larvae. If improperly applied, however, diatomaceous earth can be inhaled and cause silicosis, a terrible lung disease.

Indiscriminately spraying insecticides in your yard is also a bad idea. The best approach is multi-pronged: fleas and ticks love damp, dark places, so keep brush and cuttings away from your house as much as possible. If you do spray, concentrate on areas fleas are likely to live – under porches, in wet areas with long grass, etc.

First Lines of Defense That Do Work

So what to do? First, see your vet. Really. Topical flea and tick preventatives and treatments from your veterinarian are effective and very safe when used according to directions. Vectra 3-D, for instance, is an excellent anti-parasite treatment and preventative that both kills and repels 6 dangerous parasites, including mosquitoes, fleas, and ticks, biting flies, mites and lice.

So if you do see fleas or ticks on your pet, don’t despair – contact us and we’ll help!